My only memory of trick-or-treating was when I was 7 years old. I wore a hand-me-down cowboy costume with a very worn, leather holster that barely fit me, but I didn’t mind because I was going to fill my big plastic pumpkin with candy. I didn’t know it would be the last time I would participate in this halloween tradition. 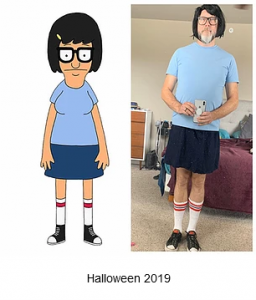 My parents were beginning their ever-narrowing journey to a separatist life that rejected all things “worldly” and embraced what they perceived led to a more godly life. Refusing to celebrate the “devil’s holiday” was the first of their choices that directly impacted me. They also quit acknowledging the holiday with handing out candy to children, carving pumpkins, and any crafts or decorations associated with the day. My mother informed the school that I was not to make jack-o-lanterns, dress up in costumes, or color pictures of ghosts and goblins. While the other kids did these thing I colored fall leaves or a cornucopia of fall vegetables. All of this disappointed and confused me. “I’m not worshipping Satan,” I thought, “ I’m just having fun with a pumpkin craft.” It was the beginning of feeling like a weird outsider for the rest of my childhood.
In an attempt to compensate for the lack of candy from trick-or-treating, my parents announced they would take me to dinner on Halloween night at Howard Johnson’s, the now-forgotten chain of roadside hotel restaurants. There I was allowed to order an enormous ice-cream sundae for dessert. While I enjoyed the sundae, my mind was on how awkward I was going to feel the following day at school when all of the kids would wear their costumes to school and show off their enormous bags of candy while they bragged, compared, and traded. I had to explain that I wasn’t allowed to trick-or-treat. Usually a friend would sympathetically offer me a few pieces of their candy.
There are no childhood photographs of me in a Halloween costume. These were thrown away by my Mom in her lifelong destruction of all family photographs that, in her mind, brought shame instead of glory to God.
But, not celebrating Halloween was only one part of the shedding from our lives all things they deemed worldly or ungodly.
It’s almost unbelievable isn’t it? I am able now to look back and laugh and/or roll my eyes at it all. It no longer brings me pain. I’ve healed from the damage it did to me and I now recognize that this strange upbringing helped make me who I am today. It was what it was and I can’t change any of that now. However, I have spent years trying to fill in the enormous gaps of knowledge and experience in my life that are taken for granted by most.
For example:
Trust me, you don’t want me on your trivia team.
If you know me well, you know I’m a people person. I love to live life to the fullest, build community and engage with those around me. I’m fairly extroverted and get energy from being around people. Folks are surprised to hear these details of my life when I choose to share them. It’s hard to explain why I don’t know the songs, movies, artists, games, fashions of my generation. It often feels like more work to explain than to just play along as if I share your memories of those good times of our youth.
I tell you this because I often observe people speaking and acting on the assumption that their knowledge and experience is the same knowledge and experience of everyone around them. They assume that people who aren’t where they are, are willfully ignorant, stubborn, or even stupid. It has taken me years to unpack and sort through the beliefs and mindset I had about life, God, family, religion, and most importantly…myself. I didn’t know what I didn’t know. I am still learning. I often choose not to show my ignorance because I’ve had too many people react as if I’m from another planet because I haven’t seen a particular, iconic movie, or don’t know the dance moves to that song, or can’t jump in the deep end of the pool with everyone else.
The next time you encounter someone who doesn’t know what you think they should know, remember my Halloween story. What is obvious to you may be completely new or foreign to them. At times, I envy your privilege. You have a lifetime of experiences, knowledge, and memories that I’ll never have. Wouldn’t the world be a better place if we all spent more time seeking to understand one another and giving others the space and permission to be where they are on their own journey of becoming?
I think so.
Oh! And Happy Halloween!
Joel
October 30, 2020/0 Comments/by Joel
https://joelspeaksout.com/wp-content/uploads/2021/03/treats-for-halloween-AL5BMPL-scaled.jpg 1707 2560 Joel https://joelspeaksout.com/wp-content/uploads/2021/03/JSO-Square4pt.png Joel2020-10-30 21:52:562021-03-02 22:00:19A Halloween Tale Stranger Than Fiction